On the other side the grass is greener: Cycling from Switzerland to Italy

This text has been written by me, Karl Brodowsky. English is not my native language. If you don't like my writing, please try reading other web pages instead. Or let me know of errors, so that I can correct them. Anyway, the spelling and wording in this text is meant to be American English in the variant that is used near the Atlantic coast. Any measurements are based on the metric system. Especially I am not sure about the geographic names that I used, so I simply use the German or Italian original names, unless I know of an English translation. I use the word "freeway" for a tollfree highway that has no intersections, but bridges and exits instead.

Having lived in Switzerland for about 6 years it was about time to go on a little tour in this country, which happens to attract even bicyclists from far away. I know it well:

"On the other side the grass is greener."

But maybe the other side of the Alps will serve this purpose well enough, let us give it a try.

Because many people from Switzerland, Germany and Austria know the Alps already quite well, I write this page in English, without any guarantee that the German version will be provided at all. The trip was planned for three days, starting on Saturday 2001-06-02. I am quite sure that I won't add any photographs to this page, because I did not take my camera along. But I might choose to add a map.

The way from Schaffhausen to Zurich is somewhat familiar to me. So I decided to take the train and start the trip from the main station of Zurich. Most trains in Switzerland take bicycles. Exceptions are S-trains during rush hour and trains that show a crossed out bicycle pictogram on the schedule. In Zurich I got off and followed the Sihl-river to the south. This was a paved route without cars and it even passed underneath most crossing highways together with the river, so it was almost like a freeway for the first few kilometers. Later this path was no longer paved, so I chose to continue on the national highway N 4. After some 15 to 20 minutes I was leaving the city on the N 4/E 41 and cycling on the freeway through the Sihl-valley, surrounded by small mountains on both sides, but pretty busy with motorized traffic. It did not take too long to the place where the highway met the railroad line from Zurich to Zug and Italy and even I was passing through Zug and heading towards Italy, following highway N 25 besides the lake Zuger See. Somewhere I got a small repair of my bicycle done, while I had some coffee myself.

At the end of the Zuger See the railroad station of Arth-Goldau can be found, where the tracks from Zurich and Basel join and some time after that I was approaching the big lake Vierwaldstättersee. Even the highways merged here, so the interstate highway A 4 (Schaffhausen - Altdorf) and the national highway N 2/E 41 (Basel - Chiasso) where combined in the Axenstrasse which follows the lake. This interstate highways did not have four lanes and in this case there would be hardly enough space for having more than one lane per direction. It was a little bit unfortunate that many northbound bicyclists used the bicycle lane that was just provided for southbound bicyclists, because it was sometimes extremely narrow. Maybe it is a better idea not to use it at all and just cycle on the road. This Axenstrasse is a very scenic road, but unfortunately there is quite a lot of motorist traffic and actually there is no other way to cycle in the vicinity, because of the mountains. If I had liked to do so, I would have taken the train or the boat for this portion of the trip, but I wanted to cycle all the way myself.

After having passed the lake, the interstate highway ended and the national highway went on. Even the traffic became a little bit less, but the highway started to climb for the Gotthard pass. During the first half of the climb the highway was accompanied by the railroad, which I had used many times, so it was still somewhat familiar. In Göschenen the tracks disappeared in the tunnel and I went for the steep climb to Andermatt. Even though many of the passes that exist now, have been used since very ancient times, this part was too difficult to cross during the Roman times. Nowadays there is even a steep railroad line going to Andermatt. Surprisingly, the area became flat after this climb, at least in the valley. I stayed for one night in that area.

In the morning I just wanted to go towards the Gotthard pass and across this pass. It was snowing, but admittedly not my first bicycle tour in the snow. Having tailwind made things a little bit easier. I got some warnings from vehicles coming down about the snowstorm on top of the pass, but only 3 km before the pass this seemed somewhat doable. Finally the snow plower came down from the pass and told me that the pass was closed. He gave me the advice to go back to Göschenen and take the train. I wanted to cycle all the way, but this was not the day for doing this, but I was still looking forward to the other, sunnier side of the Alps.

The next train was off course taking bicycles and pretty soon I had passed the tunnel and left the train in Airolo in the Italian speaking part of Switzerland. Off course the sun was shining and I was traveling downhill on the N 2 southbound. Things looked nice again. In Bellinzona I found out that the San Bernhardino pass was kind of closed as well, with no railroad to take, so I just continued to the south, crossing the Mont Ceneri pass on one of the few four lane national highways in Switzerland, unfortunately also with traffic for four lanes. From there on I kind of passed town after town until I came to Lugano. The section south of Lugano was very nice, because I followed the lake shore, crossed the lake and followed the other shore, until I found a camp ground near the water.

In the evening I continued following the lake and soon I was on the shore opposite of the camp ground. I did not take a map, but people told me, that it would not be too reasonable to go around the lake on a short evening trip. But at least I made it into Italy.

This day I just continued on the N 2 to Chiasso, where I crossed the border into Italy, coming into Como. Italy is probably the most bicycle friendly country in Europe. But still traffic in Como was quite heavy and the road signs were not too clear, so it was kind of difficult to find the way out. Finally I found it and took a small national highway on the southern shore of the Como lake with very little traffic, many tunnels and many beautiful villages.

Unfortunately I had to return after some time, so I made a U-turn and went back through the tunnels to Come and to Chiasso, were I caught a train to Schaffhausen. While waiting for the train, I had a look at the bicycling route from Chiasso to Basel, which would also have offered a possibility to do this trip, if I had had more time.

Sometimes you will even find red signs for bicyclist, either red letters on white ground or white letters on red ground. These are mostly for people who do not mind taking a few more kilometers and sometimes the lead to unpaved roads. You have to be especially careful near the border, because these routes may cross the border at places that are not allowed at night, nor with merchandise above a certain limit, nor for people from countries needing a visa on either side of the border. Use the main highways to cross the border, if you are in doubt. Unlawful crossing of the border is really much more illegal than cycling on a motorway.

There is a whole network of 9 bicycle routes (German, French) across the whole country, for example route number 3 from Chiasso to Basel. These routes are mostly separate from the busier highways, but for example they just use the interstate highway near the Vierwaldstätter See. And they are mostly, but not always paved. You might combine this for your trip and choose to use the highway or the bicycle route on a per section basis. This does take longer than using the national highways, so it was not my choice for this weekend trip.

Finally you can see a map which has been obtained using Diercke Weltatlas (133. Edition 1967), © Westermann Verlag. 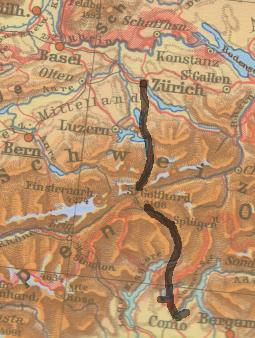 This trip to Italy has been wonderful and I hope that I will get a chance to do something like that again. Maybe I will even go across some passes the next time, but this is somewhat limited to the months near the summer.